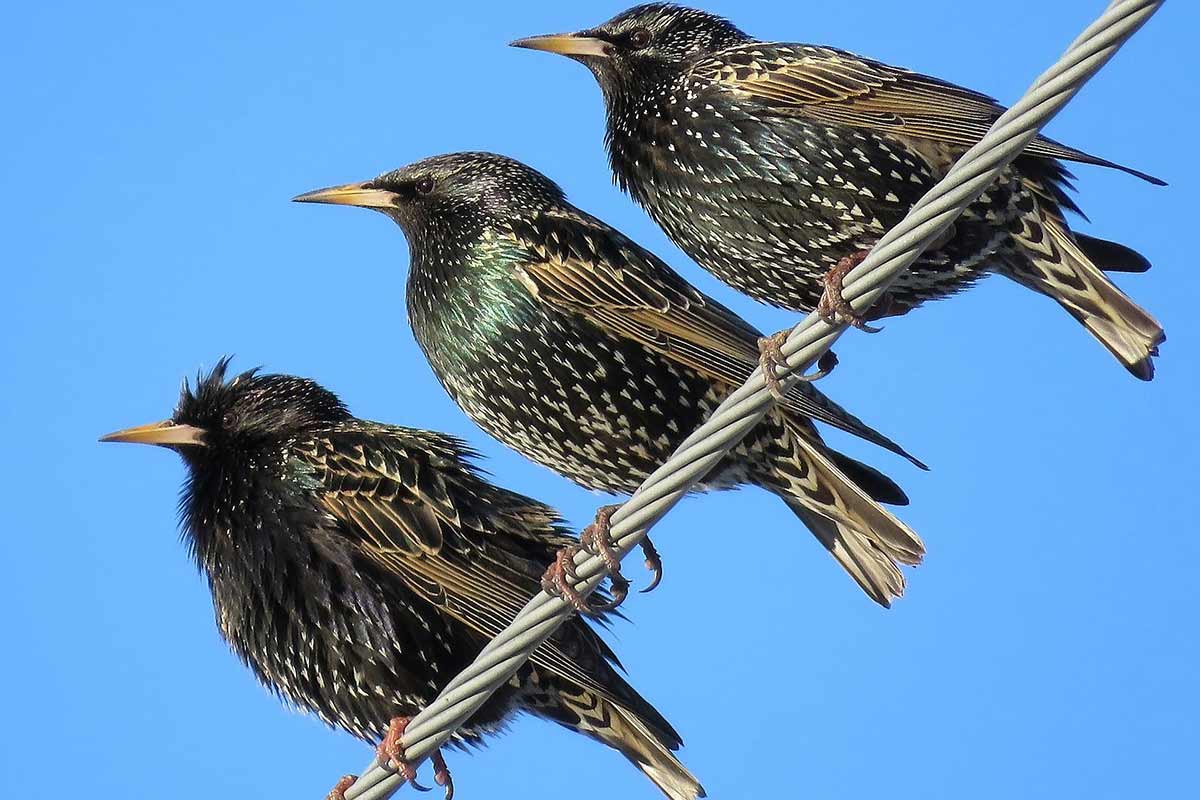 Over 500 species of birds have been recorded in Florida. Most of them we enjoy seeing and hearing as they add color, song, and variety to our wildlife.

Sadly, among these many species are three that do nothing to brighten our day. Exactly the reverse! Pigeons, house sparrows, and starlings are invasive pests that cause millions of dollars of damage a year to businesses and householders alike.

It’s hard to believe but these troublesome pests were released into the wild on purpose!

Why are these three species of birds such a problem and what can you do about them? First, let’s look at some details about each of them.

Adult pigeons (Columba livia domestica) are about a foot in length. Their coloring can be variable but generally, they are blue-grey, with black bars on their wings. They have iridescent green or purple feathers on their comparatively small heads and short necks.

Pigeons are well-known for their ‘homing’ ability, returning to their nests from hundreds of miles away. This can make them difficult pests to remove because once they have found a suitable nesting site, they can travel to safer areas to feed but easily return to their nests.

Although peak breeding seasons are spring and summer, pigeons can breed throughout the year. Young pigeons are ready to leave the nest at 4 to 6 weeks, with the parents starting a new brood immediately. Although they only lay two or three white eggs at a time, pigeon populations can grow fast!

House sparrows (Passer domesticus) are smaller birds, normally around 6 inches in length. Both sexes are brown, but adult males have a grey cap above a darker brown head and a black bib on their chest.

House sparrows are clever and can learn fast. They have been recorded activating door sensors to fly inside stores to get food. These birds can recognize the faces of people who aid or threaten them.

Egg-laying normally starts in spring, with a batch of 5 speckled whitish eggs. The young are ready to leave the nest at only 14 to 16 days. During the year, a female may lay 20 eggs. This is another pest that breeds fast.

(There are 22 species of sparrow in Florida, including several rare or endangered species. It is important to be sure which type you are dealing with.)

The European Starling or just Starling (Sturnus vulgaris) is a medium-sized bird, with adults about 8 inches long. Their plumage is iridescent dark blue or black, covered in small white dots. In the winter months, they have a greenish or purple sheen.

Starlings are highly gregarious birds and travel in flocks that may number into the thousands or even the hundreds of thousands. These enormous flocks can create significant noise and leave large amounts of droppings.

As they fly, these large flocks can move in a spectacular way called a murmuration. The flock changes shape as the birds fly, expanding and shrinking, swirling and twisting in unison in amazing patterns at high speed, with no obvious leader.

Female starlings start to lay their bluish or greenish-white eggs in early spring. A female will lay 4 to 7 eggs per clutch, with up to three broods a year. The young will leave the nest at about four weeks.

Why are these birds such trouble?

Two of these birds are quite attractive and one has a fascinating flight pattern. So what makes these such problematic pests?

Although they are three distinct species, each poses the same threats. These can be split into three main risks – disease, damage, and habits.

They can carry diseases

The potential number of different diseases carried by each species of bird is over 60. These include salmonella, toxoplasmosis, and a host of other serious diseases or infections.

The birds can spread disease through their droppings, discarded feathers, or nest debris.

In addition, the birds carry fleas, lice, and various parasites that can infest homes and businesses.

Although the risk of disease transference to humans is not high, ignoring it could make a business liable to costs and prosecution. The losses in food production and preparation caused by contamination already run into many millions annually.

They can cause serious damage

Bird droppings are highly corrosive. Each of the three pest species gathers in flocks, sometimes in large numbers. A commonly quoted statistic is that in a single year, 100 pigeons may generate up to 4,800 pounds of excrement. Imagine what a thousand starlings could do!

The droppings can erode brickwork, metal, and gutters with devastating speed. National monuments have suffered severe damage, as have large buildings in Florida.

Pigeons are especially notorious for the sheer volume of droppings left on sidewalks. In New York, a pedestrian hurt themself when they slipped on pigeon poop. This resulted in a legal case with high damages that was successfully brought against a business that didn’t clean the sidewalk outside their premises.

The birds can lift roofing materials to access nesting sites, leading to possible water damage. Their discarded feathers and nesting materials can block gutters and downpipes. These pests are occasionally responsible for electrical faults and fires by damaging wires and junction boxes.

They are a nuisance and a pest

Sparrows and starlings are very vocal birds. In the early morning and late evening, the sheer volume of their songs, amplified by hundreds or thousands of individuals, can be a serious nuisance.

All three species are opportunistic feeders. They have favorite foods but are not fussy eaters. Large flocks of these birds foraging for food are responsible for damaging crops, with costs running into tens of millions of dollars annually.

All three invasive species are responsible for adversely affecting our native bird population.

How you can minimize the problem

As they are invasive, none of the three species are covered under the Migratory Bird Treaty Act. However, some state and municipal bylaws may have restrictions against killing invasive birds. It’s worth noting that even if it is legal to kill them in your area, the negative publicity that can result is best avoided.

The most common way to protect your property is by discouraging the birds from staying while actively encouraging them to move on.

Methods we use at Wildout Animal & Pest Removal include:

These are clever pests

Pigeons can home, sparrows can learn to open doors – these are not pests that are easily discouraged from taking up residence on your building. Urban areas provide ideal nesting sites. Food and water are abundant. And predators are few.

These are wily pests that can damage your premises, carry disease, and cost you serious money to clean up after.

To effectively deter or remove these birds requires skill and a deep understanding of their habit. At Wildout Animal & Pest Removal, we have years of experience successfully and humanely removing bird pests.

Keep out other unwanted Pests

Springtime comes with more time spent outside, beautiful flowers sprouting from the ground, and animals coming out from winter hibernation. With all this excitement, there may be some unwanted pests and critters that can start to invade our own habitats. Taking preventative measures before they can do so is imperative to make sure that you keep unwelcomed guests from wreaking havoc on your home. To help you get started, Redfin reached out to animal trappers and pest professionals from Dallas, TX to Surrey, BC, including us, for our best tips on how to detract pests and wildlife from entering your home. Check out How to Detract Pests and Wildlife From Your Home This Spring to see what we had to say.